New Open Doubles World Champion is an old acquaintance: Frederic Collignon from Belgium, who secured the title together with his Swiss partner Sandro Aeberhard in a thrilling final fight against Ryan Moore (USA) and Robert Atha (England) – Congratulations to both! Collignon was also able to win the title in Open Singles and thus underpinned in an impressive way that he is still a class all for himself in foosball.

New Nation’s Cup Champion is the team Switzerland, which prevailed in a high-class final against Hungary – congratulations! The German national team was beaten by the eventual champions in the semi-finals and finished fourth at the end; third place went to the team from Belgium.

A total of 556 players from 26 countries took part in the open P4P World Championship; with a total of about 3,500 completed games you could admire the whole range of table soccer top sports, and experience exciting games at the highest level. From the tournament hall to the award ceremony, the Nations Cup, the atmosphere and of course the level of skill and sportsmanship, we have experienced a hugely successful tournament!

P4P would like to thank all participants, helpers and sponsors; and of course congratulations to all winners!

The complete results of all open events can be seen here

The World Championship titles go to:

Finally, it’s again time for a major foosball tournament! Corresponding to the soccer World Cup in Russia, the international foosball elite will meet in Berlin to play for the foosball World Cup in 14 different events. In addition, teams from all over the world will compete for the  title of Nation’s Cup Champion. 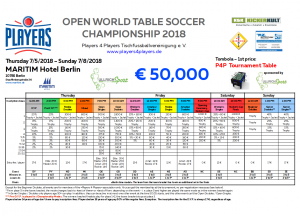 Tournament Flyer with details about prize money, entry fees and starting times of the events.